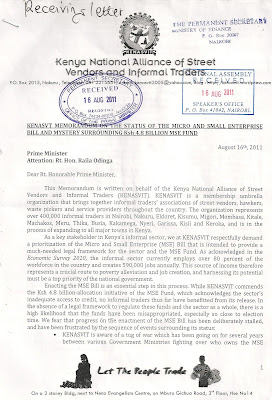 On 16th August, KENASVIT, the StreetNet affiliate in Kenya, organised a peaceful march and rally outside the Treasury, the Prime Minister's residence and the National Parliament to call for the speedy enactment of the Micro and Small Enterprise  (MSE) Bill. In the afternoon, KENASVIT officials were able to deliver a memorandum to the Hon. Vice President Kalonzo  Musyoka .


The MSE Bill was first drafted in 2000 but has been stalled continuously.  The Bill would provide a much needed legal framework for the informal traders of Kenya, and  will also set up a micro-credit fund. KENASVIT has over 400,000 members in 13 towns in Kenya.  It is planning a series of peaceful marches throughout the country over the coming month.

As a consequence of the march, the government and private sector held a multi -stakeholders workshop on 18th August at Marble Arch Hotel on the MSE Bill and MSE Fund. Twelve (12) government Ministries and Departments were represented.

KENASVIT chairperson, Simon Nasieku, considered the protests have been highly successful as it attracted considerable media attention. "We are proud that the Government has been awakened from slumber through our collective action", he stated.

Can there be a People's World Cup in Brazil?

The World Class Cities Campaign was launched in 2007 by StreetNet International and other organizations of urban poor, including shanty town dwellers, migrant and refugee communities and sex workers, prior to the World Cup in South Africa. Its aim is to expose policies of forcible removals or evictions carried out in order to beautify cities prior to sports mega-events and to help create greater global awareness about the need to rethink urban planning and services so as to actively support the needs and interests of informal economy workers.
StreetNet is an international federation of informal traders’ organisations with membership in 40 countries worldwide. It seeks to promote the rights of informal traders to decent working conditions and to lobby for urban policies and regulations which are inclusive and participatory.
Informal traders, the vast majority of whom are women, come from some of the poorest urban communities in the shanty towns around the major cities.  Their aim in life is to make an honest living, to support themselves and to feed and educate their children. Many vendors work 7 days a week, with an exhausting working day for a minimum return. However, municipal authorities often subject them to harassment, confiscate their goods and they are a prey to demands for illegal levies and other forms of extortion.

In Brazil, the WCCA campaign was begun early in 2011 and is still in an initial research phase.  The campaign has a bottom-up approach and builds on the past mobilizations and struggles of street vendors. Its aim is to support and strengthen existing street vendors’ organisations and to establish a broad coalition of informal workers and their allies, to achieve better bargaining conditions for the urban poor as they face evictions and harassment because of urban renewal projects in the context of the FIFA World Cup.
The main objectives are:
a. Denounce the negative impact of infrastructure projects (new Stadiums, roads, and destruction of natural markets) on the livelihoods of informal traders whose needs and concerns are consistently overlooked by urban planners;

b. Pressure the 12 host cities and FIFA authorities in Brazil to promote social solidarity economy projects,
in consultation with  representative organisations, which allow local vendors and waste pickers to work and benefit from the business opportunities that are offered by the World Cup, not just the large multinationals and Brazilian official sponsors;

c. Contribute to the establishment of municipal bargaining forums in all host cities and to a national bargaining structure.
The Brazil WCCA team at present comprises the StreetNet International campaign coordinator, one specialist adviser and three researchers who cover the 12 host cities in the three different regions. They are respectively: Nora Wintour, Luciana Itikawa, Emly Costa (North and Northeast - Manaus, Fortaleza, Natal and Recife), Marina Brito (Central - Cuiabá, Belo Horizonte, Brasília and Salvador) and Maira Vannuchi (South and Southeast - São Paulo, Rio de janeiro, Curitiba e Porto Alegre).
Bringing street vendors' organisations together
The first step of the campaign consists in mapping the main representative organisations of street vendors in the 12 host cities. The street vendors’ scene in Brazil is particularly complex, since the trade union movement has historically developed struggle strategies based on the factory model and formal employment. In Brazil, there are various pro-poor programmes, some developed by the government, including cooperatives based on a social solidarity economy model but no specific public policies or programmes to assist street vendors improve their livelihoods. The existing street vendors’ organisations are largely informal, fragmented, local and with limited resources.
Finding Allies in the Housing Rights Movement
In comparison, the housing rights movement in Brazil is better organised and has recently set up popular committees of those affected by the World Cup in the 12 host cities.  (Comites Populares de los Atingidos por la Copa ). The Pan American Games of 2007 in Rio de Janeiro, where evictions occurred, huge amounts of public funds were spent on sports and leisure facilities, and there was a complete absence of any social benefits for the urban poor has left a bitter legacy.  Rio will not only host the World Cup in 2014 but also the Summer Olympics in 2016.
In many of the host cities, contacts with street vendors associations have been made through the popular committees and, in turn, social movements have become more aware of the potential negative impact of the World Cup on informal traders.   The mapping exercise has opened avenues of discussion among street vendors about the need to develop a strong and broad based movement to protest their exclusion from urban renewal plans.
Can there be a People's World Cup?
There is considerable debate about the potential negative impact of the World Cup, looking at issues of corruption in public contracts, lack of social control, evictions and destruction of shanty town communities, working conditions in construction sites, child trafficking, prostitution and sexual tourism and the persecution of informal traders. Even football fans have joined the debate, denouncing corruption in bidding processes and calling for an end to elitism in football. There is also concern that in order to get everything ready for the World Cup on time, the government will declare a virtual state of emergency where the rule of law is laid aside, and that public may support such measures in the general World Cup euphoria. The unanswered questions are “Who benefits from the World Cup?” or can there be “A People’s World Cup”?
Lessons from South Africa
Most street vendors’ organisations are only just beginning to take into account both the opportunities and the risks associated with the World Cup. There have been incidents with street vendors being moved away from traditional vending sites in order to make way for the construction of new roads. But as was the case in South Africa, it is thought that the major municipal attempts to “clean up” the cities will take place 6-12 months before the World Cup and when decisions are made to create exclusion zones around the Stadiums and fan parks where only official sponsors can trade. In South Africa, the level of organisation of street vendors was quite disparate and it was not possible to create any national forum or advocacy body.  There are many lessons to be learned for Brazil.
Plans for the future
Street vendors’ organisations in Brazil have not yet had the opportunity to go beyond a neighbourhood reach. The World Class Cities for All Campaign is seeking to build a framework to link different inner-cities leaders and organisations together in a broad national network of street vendors’ representatives and allies.
StreetNet counts on the support of the CUT – Central Unica dos Trabalhadores, the largest confederation of trade unions of the country and many other allies. It is working with its partners in Brazil so that well before the World Cup kicks off,   street vendors’ organisations will have established coordination structures in the 12 host cities to allow street vendors to negotiate for licenses and spaces to trade and other facilities to help them improve their livelihoods. StreetNet also hopes it will be possible to go beyond the municipal level and set up a national bargaining structure that will allow the street vendors to negotiate and demand their rights in a transparent and democratic manner.
Keep posted!
If travelling to Brazil before the World Cup:
1. Visit http://streetnet-campaigns@blogspot.com to get up-to-date news and information
about the situation of street vendors in the 12 host cities
2. Get in contact with Comite Popular de los Atingidos  (Popular Committees of those Affected by the World Cup) http://comitepopularcopapoa2014.blogspot.com/ in the host city you plan to visit for a briefing on the main issues that social movements are confronting.
3. Get in contact with the Frente Nacional dos Torcedores (National Front of Football Fans) http://www.frentedostorcedores.com.br/and send them greetings from your football fan club or as an individual football fan.
4.And remember to buy food and drinks from local vendors so that your visit can also bring some benefit to the urban poor and not just the big chain companies!
Text by WCCA Brazil Research Team; Photos Maira Vanucchi
Posted by Oscar Silva at 10:50 3 comments:

Street vendors in Llongwe are facing tough times as the government seeks to gain their political support in the face of widespread civil society criticism of corruption and other malpractices. On August 17th, prior to a substantive popular demonstration which the government brutally repressed, causing 19 deaths,  government officials toured the streets, telling vendors not to participate and offering them permits and loans to aid their small businesses. However, when vendors started trading on August 18th, the police were deployed to chase them away. The Malawi Union for the Informal Sector (MUFIS) has denounced the government's manipulation of the street vendors and joined the civil society protests calling for an end to corruption and to protest the soaring cost of living.